We apologize but at this time you can only have either GiftTree products or Teleflora products in your cart at the same time. If you wish to order both you must place two separate orders.
close 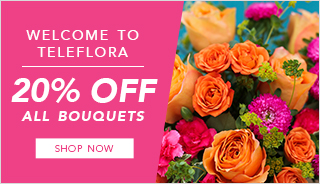 Have you ever seen a flower and wondered what it was called or heard a flower name and wished you knew what it looked like? Browse the flower glossary below to learn the meaning of all types of flowers:

From the cool mountain regions of the Andes, alstroemeria, also known as the lily of the Incas, is a beautiful flower with striped petals. They come in orange, pink, red, purple, yellow, white and salmon colors.

The Amaryllis is a monotypic plant that contains the amaryllis belladonna lily. Usually known for its colorful flowers, they are usually funnel shaped and come in white, purple or pink.

Gypsophila typically used as a filler flower is a bushy plant that has small flowers coming off of its branches. It is from Central and Eastern Europe. The flowers are usually either white or pink.

Bells of Ireland usually appear to have spikes of white flowers and bright green calyces. They can grow in harsh conditions with poor soil. The flower is native to Turkey, Syria, and Caucasus.

Shop for Bells of Ireland Flowers

Birds of Paradise also known as crane flowers is known for its distant exotic look. Native to South Africa they bloom from September to May. The shape of the flower resembles a brightly colored bird in flight. It has both orange sepals and blue petals. The modified leaves can be green, red or purple-ish.

Shop for Bird of Paradise Flowers

The calla is native to the Northern Hemisphere in cool temperate regions. It also can be found in Europe, Northern Asia, and Northern America. Usually found growing in ponds and bogs, the leaves are known for having a round heart shape and the flowers come in a variety of colors such as yellow, orange, pink, rose, lavender, and dark maroon.

The carnation, native to Eurasia, is a commonly known flower because of its distinct characteristics such as having branched or forked clusters. Additionally their petals are serrated. They are well known because they come in numerous colors such as pink, light red, dark red, white, striped, green, purple, yellow, and blue.

The miniature carnation, like its sister is from Eurasia. It has narrow green leaves and grows as a round clump of petals.

Chrysanthemums are a blooming flower that are native to Asia and Northeastern Europe. In the beginning stages of the flower, it has a tight circle shape made out of buds perched above the leaves. Once they start to bloom more, they open up in the form of a framatic display. They come in a variety of colors such as red, orange, yellow, purple, pink and white.

Also known as "Kermit Poms," these specific types of chrysanthemums have a green color that covers their "pom pom" shape. Their rounded heads are great for a filler in your bouquet as they come in sprays.

Cushion chrysanthemums are known for blending rustically with the colors of autumn. The flowers are composed of small circles of petals that gradually get bigger as you move further from the center. These chrysanthemums are not as flat as the button type but rather have more elevated petals. They come in yellow, white, gold, dusty pink, maroon, orange and can even be a combination of these colors.

Daisy chrysanthemums are native to Japan and China. They usually have small dark green multi lobed leaves which have points at the margins. They come in almost every color except blue.

Daffodils are known for their trumpet shaped petals in the foreground and star shaped petals in the background. They are native to the Mediterrean region such as the Iberian Peninsula. Additionally they are also common in Northern Africa and the Middle East. While yellow is their most common color they also come in white orange and pink.

Dahlia are native to the mountain regions of Mexico. Known for being the colorful spiky version of a daisy, they can range in size from an inch to an entire dinner plate. Dahlias can come in all sorts of colors. Sometimes these colors even blend together on the flower.

Delphiniums are native throughout the Northern Hemisphere and some parts of Africa. They are known for being grown for their tall spiky structure that is accompanied by flowers which are usually some shade of blue.

Gerbera is part of the sunflower, daisy and aster family. They are widely distributed through Africa, Asia, South America and Madagascar.They usually appear to look like colorful sunflowers because of their similar characteristics. They can come in yellow, orange, white, pink or red.

Hydrangeas are native to Southern and Eastern Asia and North and South America. The individual flowers of a hydrangea are very small but usually are carried in bunches at the end of a long stem. They are known for coming in a variety of different colors such as white, blue, red, pink, and purple.

The iris, native to Europe and Asia, has a fan like shape with six lobes. It's stems are very long which are either solid or hollow. Iris flowers come in so many colors like peach, blue, cream, lavender, orange, pink, purple red, rose, white, and yellow.

Larkspurs are part of the buttercup genus. Native to certain parts of California, they look like stock but in a spiral like formation. They come in different colors such as red, pink, white, and violet.

The asiatic lily is native to Eastern Asia and is grown for their bright colors and large span which can be up to 6 inches in diameter. They come in red, yellow, orange, purple, pink and white. Often times the flower can have multiple colors, changing specifically towards the tip or center of the flower.

Oriental lilies, while also native to Asia, are often times bigger than asiatic lilies and are very tall. The leaves are also wider, further apart, and a deeper green. These lilies also often times have speckles on the petals.They come in white, yellow, pink and burgundy.

Found in the Southern part of the US, Mexico, Caribbean, and South America, this flower grows along a long straight stem in a rose-like funnel shape. They come in a variety of different colors such as deep purple, white, blue-violet, green, and red.

This species is native to Europe, North Africa, and the Mediterranean. The flowers can appear by themselves or in a cluster.They resemble a trumpet or cup-like shape made of 6 petals in colors such as white, yellow, orange, or pink.

The orchid is native to Asia and Australia. They usually have three petals and three sepals. The petals can be described as looking like the shape of a mantaray. Since there are a variety of different species they also come in many colors like blue, purple, red, pink, white,yellow, orange, and green.

Native to Europe, North America, and Asia, peonies have tissue-paper like petals that close in the shade and open up with sunlight. These fluffy like flowers come in white, pink, rose red, and yellow.

Known as a Christmas flower, the species is native to Mexico. The bracts of the plant are what we usually consider to be the flower which come mostly in red but also, pink, orange, green, and cream. The actual flower comes from the stem tips and are small and yellow in the center of the bract.

Similar to roses, ranunculus, seem to have the perfect shape. On top of its rose like structure it has multiple layers of tissue thin petals that can be apricot, pink, red, burgundy, yellow, and cream. Since there are a variety of different types of ranunculus they are native to a bunch of different areas such as North America, Europe, Asia, and the Boreal Kingdom.

Originating from Asia, Europe, North America and Africa, the rose is one of the most common flowers. Growing from shrubs and having sharp thorns along their stem, roses vary is size as well as shape.

Rose sprays are basically the same as individual roses except that multiple roses blossom from one branch. Additionally spray roses are are smaller and have shorter stems.

The snapdragon name is very fitting for this flower as it resembles the face of a dragon that "snaps" its mouth open and closed. Native to Europe, the US, and North Africa, they come in a variety of colors such as white, yellow, pink, red, orange, peach, purple, and violet.

Stock is a native plant of Greece and Albania. This plant can be described as a stiff stem surrounded by tissue paper flowers. They come in colors such as pink, red, rose, purple, lavender, and white.

The sunflower, a native plant of North America, Central America, and South Africa, takes its name because its head looks like the center of the sun and the petals look like the rays. Its most common color is yellow but they also come in red and white.

Found originally in southern Europe and Central Asia, tulips are known for their large bulb like shape. With such a large variety they are available in almost every color.