We apologize but at this time you can only have either GiftTree products or Teleflora products in your cart at the same time. If you wish to order both you must place two separate orders.
close

Home > Floral Facts > What is My State Flower

What is My State Flower?

We present a list of the 50 states and their flowers; for more information, visit The United States National Arboretum. Since ancient times, civic leaders have used flowers and flower images as symbols of thriving communities. In fact, you might say flowers were an early form of advertising. And while there's no shortage of commercials in modern America, we still tap flowers for their unparalleled prowess in communication, with each state in the union proudly claiming an official state flower. 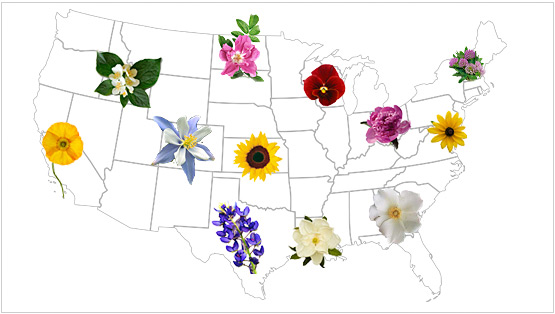 State flowers are mostly a native flower which originated in the respective geographical zone.

A guide to state flowers, from peony and prairie rose to poppy and pine.

Alabama: Camellia. Native to Asia, camellias are known throughout the world for their elegance and grace.

Connecticut: Mountain Laurel. This pink and white blossom has a lovely smell.

Delaware: Peach Blossom. A natural choice for a grower of peach trees.

Hawaii: Hibiscus. A magnificent flower that evokes the tropics.

Illinois: Purple Violet. The 1893 World’s Fair in Chicago spurred states to choose emblematic flowers. Illinois made the violet its official selection in 1908.

Indiana: Peony. This luscious bloom has long been associated with prosperity.

Iowa: Wild Prairie Rose. A rugged version of the regal favorite. Adopted in 1897.

Kansas: Sunflower. One of the most iconic of all flowers.

Louisiana: Magnolia. Stately and serene, magnolias are a treat for the senses. Magnolia was designated as Louisiana’s state flower in 1900.

Maine: White Pine Tassel and Cone. The only state flower that is not really a flower.

Maryland: Black-eyed Susan. These perennials are members of the sunflower family.

Michigan: Apple Blossom. Chosen as an emblem in 1897. Michigan is still a major apple grower today.

Minnesota: Pink and White Ladyslipper. One of 43 orchid species that grow in Minnesota.

Mississippi: Magnolia. The flower received its official designation in 1952.

Missouri: Hawthorn. The beautiful white flower of the hawthorn tree was selected as state flower in 1923.

Montana: Bitterroot. Long used by Native Americans, the plant was brought to wider fame by explorers Lewis and Clark.

Nevada: Sagebrush. An ideal choice for the Sagebrush State.

New Hampshire: Purple Lilac. According to historian Leon Anderson, purple lilac reflects the hardy nature of those in the Granite State.

New Mexico: Yucca. Also known as "Lamparas de dios" (Lamps of the Lord) because of its brilliant white flowers.

North Carolina: Flowering Dogwood. Selected from a number of other flowers, the delicate white blossom won the title in 1941.

Ohio: Scarlet Carnation. Among the most resilient and sturdiest of flowers.

Oklahoma: Mistletoe. Steeped in lore, the mistletoe in this case evokes the endurance of those who settled the land.

Pennsylvania: Mountain Laurel. The governor chose this pink and white bloom in 1933.

South Carolina: Yellow Jessamine. Fragrant and fertile, it grows abundantly throughout the state.

South Dakota: Pasque Flower. Part of the buttercup family and a harbinger of spring.

Utah: Sego Lily. Its beauty is both simple and exotic.

Washington: Coast Rhododendron. Lush and lovely, the flower gets its name from the Greek words for rose (rhodos) and tree (dendron). Picked in 1892.

Wisconsin: Violet. Selected in 1909, it was not officially designated until 1949.